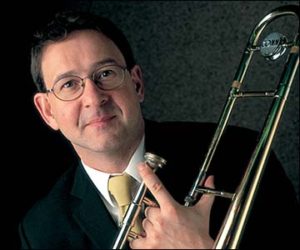 Ian Bousfield was born in York in 1964 and began playing the trombone at the age of seven, his first teacher being his father, a trumpeter. Like many of England’s great brass musicians, Ian’s musical roots are firmly planted in the British band scene, having been solo trombone with the National Youth Brass Band at the age of thirteen, he was solo trombone for 4 years in the Yorkshire Imperial Band. In 1979, Ian became the youngest ever recipient of the London Symphony Orchestra scholarships and in 1980 he joined the European Youth Orchestra, under the direction of Claudio Abbado, where he stayed for two years. After just six months of study at London’s Guildhall School of Music he became Principal Trombone with Manchester Halle Orchestra and in 1988 was appointed Principal Trombone with the London Symphony Orchestra, a position he held until September 2000 when he won the position of soloist in the Orchestra of the Opera of Vienna (Wiener Staatsoper). During his time with the London Symphony Orchestra, Ian has played on the “Star Wars”, “Braveheart” and “Titanic” soundtracks, as well as many other famous film scores.

Throughout his career with his orchestra, Ian has been very active as a soloist, appearing as a soloist with the world’s biggest brass bands, regularly and on recital stages with his wife Alison on piano.

Ian has performed solo with the Halle Orchestra and the London Symphony Orchestra on many occasions and has recorded a CD with the London Philharmonic Orchestra and BBC Philharmonic as well as a solo CD for EMI as part of his “Virtuosos” series Ian Bousfield was appointed Professor at the Royal Academy of Music in London in 1992, a position he still holds, he has recently been awarded an Honorary Member of the Academy. In addition to his engagements in London, Ian has been an advisor to the Royal Northern College of Music in Manchester since 2002.

He has also been a visiting teacher at Tanglewood Festival and a guest artist with the Empire Brass Quintet.
For 3 years and now again Ian Bousfield was and is a teacher at the Brass Academy Alicante.

In December 2003 Ian was accepted into the Vienna Philharmonic Association (club), the first time in the orchestra’s history that an Englishman has had this honor.