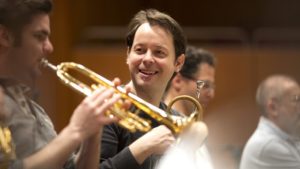 „Here is an orchestra that is not only very brilliant – it doesn’t have any weaknesses at all. They are enormously spontaneous and emotional performers, playing every concert like it could be their last. They give everything, more than a hundred per cent.“

Before he used to be principal trumpeter at the „Staatskapelle Berlin“ – „Staatsoper unter den Linden“ under Daniel Barenboim.

Martin Angerer is known as being a cosmopolite trumpeter. He studied with most prestigious teachers like Bo Nilsson and Hakan Hardenberger in Malmö, Pierre Thibaud and Maurice André in Paris, Adolph Bud Herseth in Chicago, Tim Morrison and Thomas Stevens in Los Angeles and Hans Gansch in Salzburg.

2017 he was asked by Alan Gilbert, former chief conductor of the New York Philharmonic Orchestra, to be a member of the world orchestra for peace, awareness and human rights.

Beside his orchestra and soloist life he is well known as an international recognised teacher. The number of students who are winning auditions is growing continously.