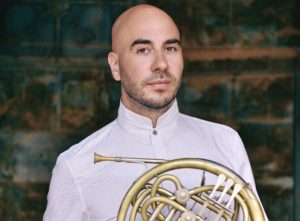 After playing for almost a decade in the Arnhem Philharmonic Orchestra he became principal horn at Orquesta Sinfónica de Galicia, position which he quited to become a member of the prestigious Royal Concertgebouw Orchestra in 2016.

As a solo musician he has performed recitals or solo concertos in The Netherlands, Belgium, France, Brazil, China and Spain, where he also has been invited to give Master Classes for young students.