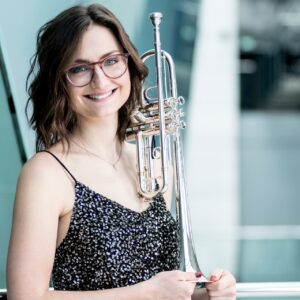 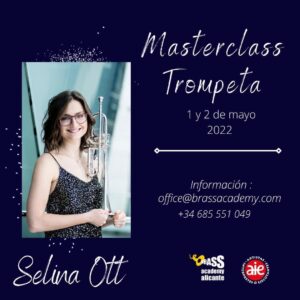 Selina Ott was awarded the Opus Klassik Award 2021 for her debut album , Trumpet Concertos’ together with the
Radio Symphony Orchestra Vienna and conductor Roberto Paternostro.

As the first woman ever in the seventy-year history of the ARD International Music Competition Selina Ott was awarded
the 1st Prize in the category trumpet at the age of only 20 in September 2018.

Subsequently, she has been invited to perform with leading orchestras such as the WDR Symphony Orchestra, the
Czech Philharmonic andthe Deutsches Symphonie-Orchester Berlin. She has already played with the Orchestra of the
Marinsky Theatre under the baton von Valery Gergiev, ORF Vienna Radio Symphony Orchestra, Symphoniker Hamburg, Nordwestdeutsche Philharmonie and Collegium Musicum Basel as well.

Selina Ott started her music studies at the age of five years on the piano. One year later, she began to study trumpet
with her father Erich Ott. She continued her studies at the University of Music and Performing Arts in Vienna with
Martin Mühlfellner and at the University of Music in Karlsruhe with Reinhold Friedrich.
In 2020 Selina graduated with distinction (Bachelor of Arts) in the class of Roman Rindberger at the Music and Arts
University of the City of Vienna.

In June 2021 her second CD together with pianist En-Chia Lin was released by the label Orfeo.