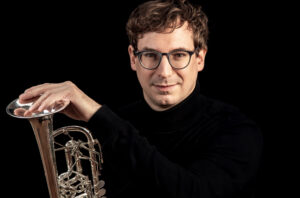 Andre Schoch has been a member of the Berliner Philharmoniker since 2017 and holds a substitute professorship at Mannheim University of Music and Performing Arts since 2021.

From 2014 to 2017 he was principal trumpet at the Philharmonic State Orchestra Hamburg. Before that, engagements as principal trumpet took him to the Deutsche Oper Berlin and the Gewandhausorchester Leipzig. As soloist, Schoch has performed with the Philharmonic State Orchestra Hamburg conducted by Kent Nagano, the Polish Kammerphilharmonie as part of the Festspiele Mecklenburg-Vorpommern, the Prague Chamber Orchestra and the Berliner Barock Solisten.

Alongside his orchestral engagements Andre Schoch is also in high demand as a chamber musician. He is a founding member of the ensemble “10forBrass” and the Duo Schoch/Höricke. Regularly Schoch is also invited to play with the famous ensemble “German Brass”.

Since 2020 Schoch is tutoring trumpet students at the Karajan Academy of the Berliner Philharmoniker and frequently leads rehearsals for the academy’s brass ensembles. From 2015 to 2017 he taught at the Hochschule für Musik und Theater Hamburg. Schoch has given serval acclaimed Masterclasses at the Karajan Academy, the Shanghai Orchestra Academy and Manhattan School of Music.

Born in 1987, Schoch was given his first trumpet lesson at the age of eight by Ansgar Dümchen. From 2004 to 2007 he was a student at the Hochschule für Musik Karlsruhe, studying with Professor Reinhold Friedrich and Professor Klaus Bräker. Later he studied with Professor Matthias Höfs at the Hochschule für Musik und Theater Hamburg and from 2010 to 2012 with Gábor Tarkövi at the Karajan Academy of the Berliner Philharmoniker.

Schoch‘s versatile repertoire, as soloist and chamber musician, has been released on various audio- and video recordings by labels such as Berlin Classics, Dabringhaus & Grimm and Genuin.