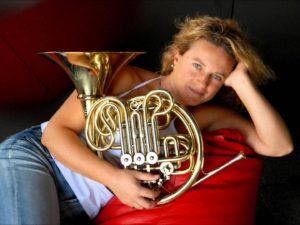 French Horn   Born in Santa Fe, Argentina on the 15th of November, 1966
Since 1993 and until 2008 was Solo Horn in the Radiosinfonieorchester Vienna  and is a member of the chamber music groups „VIENNA BRASS “ (Brass Quintet)  and the “ Austrian Horns “.   Started studies on the French horn at the age of eight under her grandfather, from 1979 under Guelfo Nalli in Buenos Aires In 1981 she received a scholarship to study under Prof. Antonio in New York.   From 1984 to 1986 she continued her studies in Berlin with a scholarship to the „Karajan Akademie“ under Gerd Seifert. She finished her studies at the „ Hochschule der Künste Berlin“, also under Prof.  Seifert, with the highest marks.   After she made her debut at the age of 12, she continued her solistic and chamber music activitie in Argentina as well as Europe, in, among others, the „Yehudi Menuhin Festival (Gstaad)“, „Luzern Festival“, „ Lysy Festival “, Bern, Genf (Victoria Hall), Queen Elizabeth Hall in London, Berlin, Stuttgart, Vienna, Spain, Slovenia , Hungary and Italy.     She also appeared as a soloist with the Stuttgarter Philharmoniker, RIAS Berlin, SOB Berlin, “Kammerorchester des slovenischen Rundfunks ” , Radio Symphony Orchestra Vienna ,Mozartorchestra Vienna , Orquesta Estable del Teatro Colon, Orquesta Nacional de Camara de Montevideo, Symphony Orchestra of:  Santa Fe, Rosario, Corrientes, Mendoza, Parana, and the Orquesta Juvenil  de Radio Nacional, Berlin Chamber Orchestra , among others. In 1981 she won the first prize in „Mozarteum Argentino “ at the  „VII Competition for Young  Soloists of the City of Mar de Plata“ and in 1982 received the first prize at the „IX Competition for Young Soloists „ in Santa Fe.   From 1984 to 1988 she played often as substitute in the “Berliner Philharmonischen Orchester”,in the “Orchester der Deutschen Oper Berlin” , and in the “Symphony Orchestra Berlin “ (first horn substitute contract).   From 1987 to 1990 she was the first horn of the Gustav Mahler Jugendorchester under the direction of Claudio Abbado and in 1991she was first horn of the “ Festspielorchester des Gustav Mahler Festes” in Kassel.   From 1988 to 1992 she was first horn of the Stuttgarter Philharmoniker.   In 1989 she received the „Konex Prize for Classical Music“ in Buenos Aires ( a prize for the 100 most important artists in the history of Argentine classical music) In December 1991 she won the first prize at the international competition for French horn „Città di Porcia e Alpe Adria“ in Italy.   From September 2008 French Horn Teacher at the “Brass Academy Alicante “(Spain).