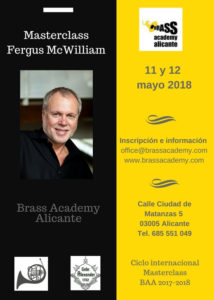 Berlin Philharmonic hornist FERGUS McWILLIAM was born in 1952 on the shores of Loch Ness in the Scottish Highlands. After hearing his first orchestra concert at the Edinburgh Festival as a very young boy, he decided on the spot that he wanted to become a hornist. After his family subsequently emigrated to Canada, he sold newspapers in order to acquire his first instrument and lessons. He graduated from the University of Toronto as a student of Eugene Rittich after initial studies with John Simonelli, Frederick Rizner and Barbara Bloomer. He made his first solo appearance at the age of 15 with the Toronto Symphony in 1967 under Seiji Ozawa. McWilliam freelanced in London, England in 1971 and toured Canada extensively between 1972 and 1975 with the Classical Brass quintet. He also played with the National Ballet of Canada Orchestra and the New Chamber Orchestra of Canada.

In 1975 he was appointed to Orchestra London where he played under Karl Richter and continued to appear with several other Canadian orchestras and chamber music ensembles. He taught horn and chamber music at a number of music schools, notably, the University of Western Ontario, while pursuing further studies in Amsterdam with Adriaan van Woudenberg of the Concertgebouw Orchestra and with Wilhelm Lanzky-Otto in Stockholm.

In 1979 McWilliam became a member of the Detroit Symphony Orchestra under Antal Dorati. He joined the music faculty of the University of Windsor and was a founding member of the Renaissance Wind and Premier Brass quintets.

In 1982 he left for Germany and an appointment to Munich’s Bavarian Radio Symphony Orchestra led by Raphael Kubelik and Sir Colin Davis, and continued to expand his solo and chamber music activities with the Munich Wind Soloists, the Bach-Kollegium Munich,and Consortium Classicum. He also performed with the Munich Philharmonic, the Bavarian State Opera and the Stuttgart Chamber Orchestra.

In 1988 he became a founding member of the Berlin Philharmonic Wind Quintet. After twenty-seven years touring the world and having made over a dozen CD recordings, this ensemble enjoys nearly reference status.

McWilliam also teaches students from around the world and he has given master classes at numerous  leading music schools in many different countries. Not only has he taught at both the Berlin Philharmonic Orchestra Academy and the Hanns-Eisler-Musikhochschule in Berlin; he has also been a visiting lecturer at, for example, the Royal Academy of Music and Guildhall School in London, the Paris Conservatoire, the Tokyo University of Fine Arts and the Royal Conservatoire of Scotland in Glasgow. For nearly a decade he taught within Venezuela’s famous youth music programme El Sistema, and has since become a board member of Sistema Scotland. A significant number of his students have gone on to join major world orchestras, including Sarah Willis, who is now his own Berlin Philharmonic horn colleague.

He is the author of “Blow Your OWN Horn”.