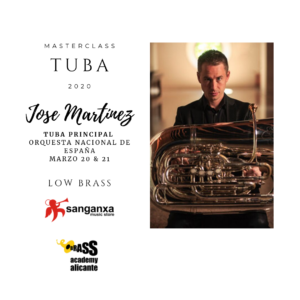 As a reflection of his role models, Jose believes in the power of national and international artistic collaborations for the benefit of communities all around the world. An enthusiastic orchestral player, Martinez was fortunate to perform as guest with the Boston Symphony and Pops, Chicago Symphony, Gothenburg Symphony, Jalisco Philharmonic, Malaysian Philharmonic, Minnesota Orchestra, Naples Philharmonic, New York Philharmonic, New World Symphony, Porto Symphony and the Saint Louis Symphony. A seasoned traveler, recent opportunities with the world-renowned Mahler Chamber Orchestra brought him on tour to Australia, China, Germany, Japan and Spain. Upcoming engagements include performances with the Seattle Symphony.

Fascinated by chamber music, Jose is a member of brassONEquintet since 2018 and the Duo 2Arts!, a dance and music project cofounded in 2019 with the ballerina Sherezade Soriano. Jose has collaborated with groups such as World Brass and performed with artists from the New York Philharmonic and the American Brass Quintet as a Zarin Mehta Fellow or the Chicago Symphony Orchestra and the Ensemble Dal Niente in the MusicNOW contemporary music series.

Emerging educator, Martinez has shared knowledge with other musicians at the University of Guadalajara in Mexico, Porto Polytechnic University School of Music and the Gravíssimo! Festival in Portugal and at various institutions and summer workshops in Spain including the Numskull Brass Festival Caudete. Imminent teaching commitments include those at the Ensemble de Cuivres de Belgique Brass Festival in Belgium and at various locations, to be confirmed, in North America.

A learner for life (Sergio Carolino dixit and one of his inspirations), Jose is thankful for the occasional guidance and support received from Alan Baer, Anne Jelle Visser, Chris Olka, Dennis Nulty, Don Lucas, Floyd Cooley, Jimmy Olsson, Randy Hawes, Toby Oft and credits a great deal of progress to summer studies at Tanglewood Music Center, Music Academy of the West and the University of Redlands. He will forever be indebted to Mike Roylance, Gene Pokorny, Morten Agerup and Sergio Finca, his greatest influences. He received numerous awards that supported his career and avoided extraordinary expenses in the bosom of the family. The La Caixa Foundation Fellowship (Fulbright-equivalent) stands out since, back in 2014, Jose was the first brass player ever awarded since the creation of the Foundation in 1982. Having attended Valencia Conservatory, University of Gothenburg, Chicago Negaunee Music Institute and the New York Philharmonic Global Academy, Martinez will complete a doctorate at Boston University on December 5th, 2019, becoming a member of the USA Pi Kappa Lambda National Music Honor Society in 2020.